The differential has been sqeaking and nods up and down under load so it was time to get some new bushes.

The front two bushes are the same ones used on the front wishbones which is a Ford TCA bush; PFF19-102H also a heritage bush.

The heritage bushes are polyurethane same a the normal purple ones but in a darker OEM black colour.

Here’s a small video clip of the rear diff bush on video which shows the seperation:

Step 1 remove the differential, this was relatively straightforward. Unbolt and drop down with the jack. 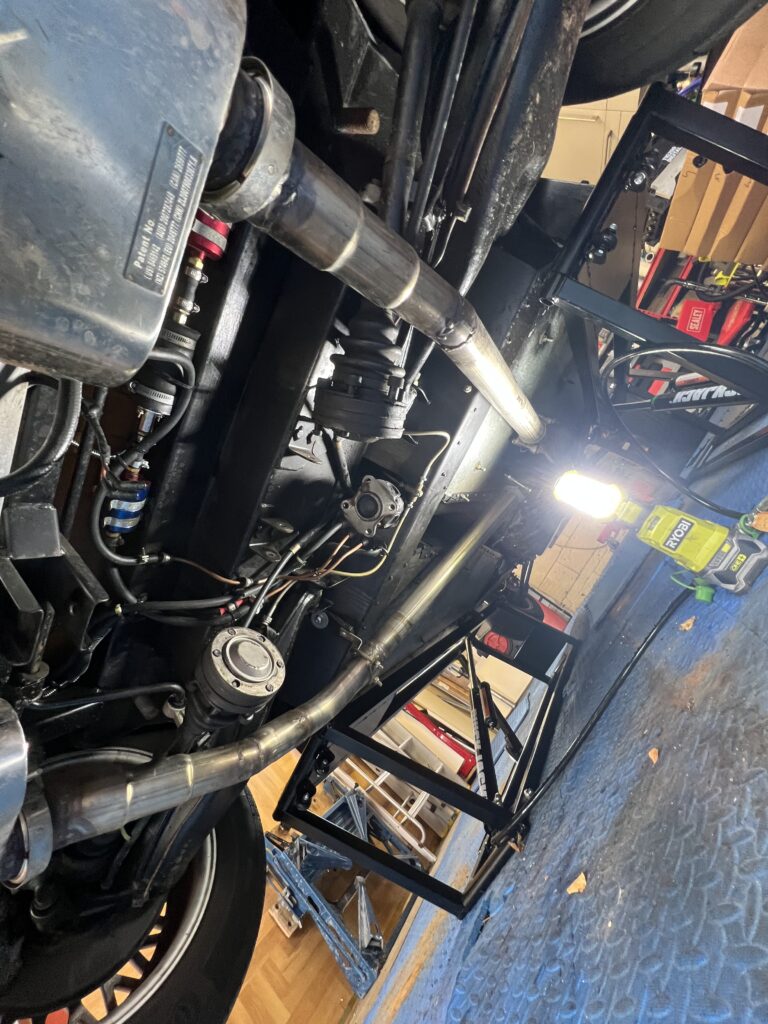 Removed diff looking a little dirty, good time to give it a bit of a clean. 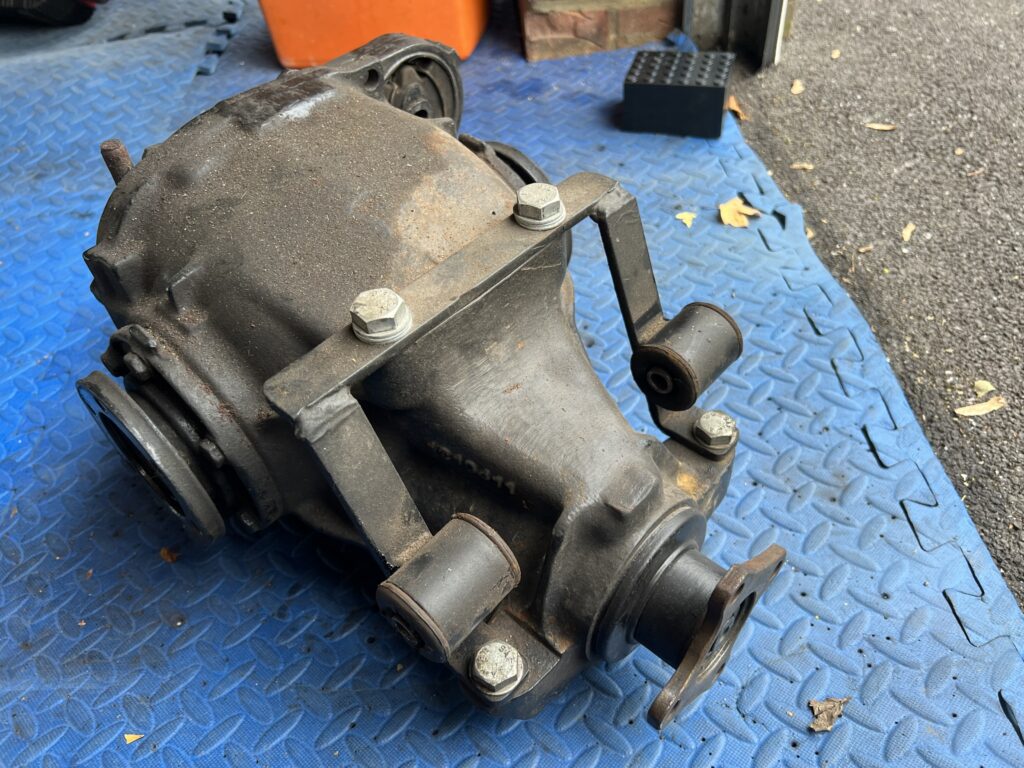 The rear bush – the middle part is separating from the outer part leading to excessive movement. 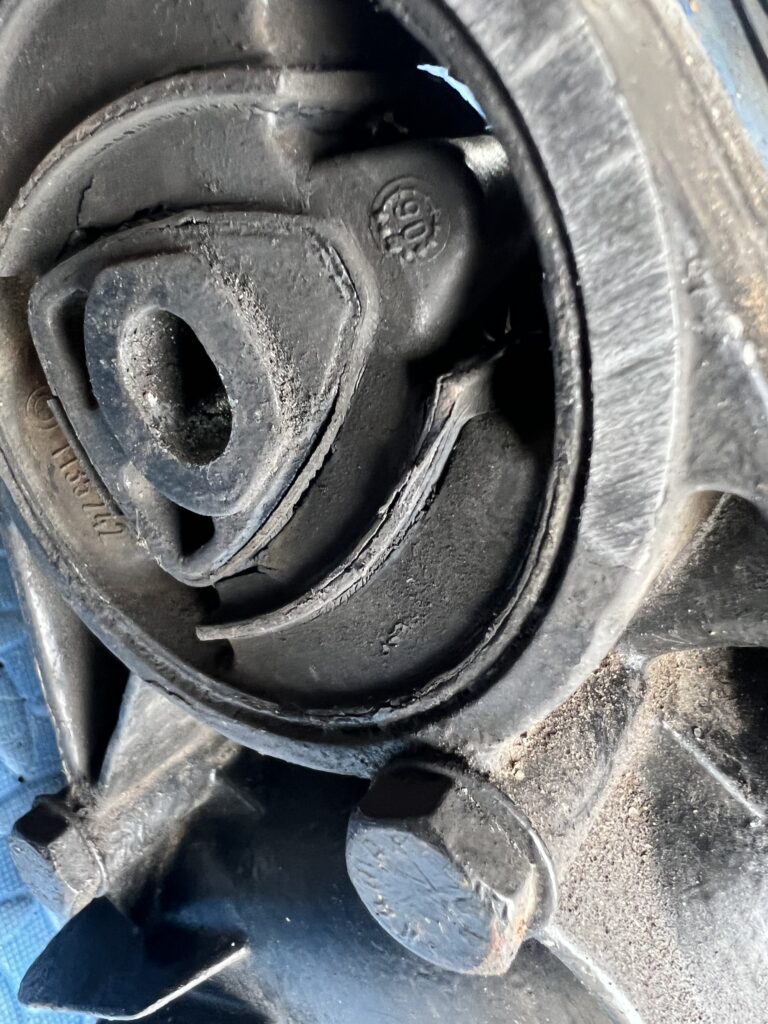 Removing the old ford bushes with the press 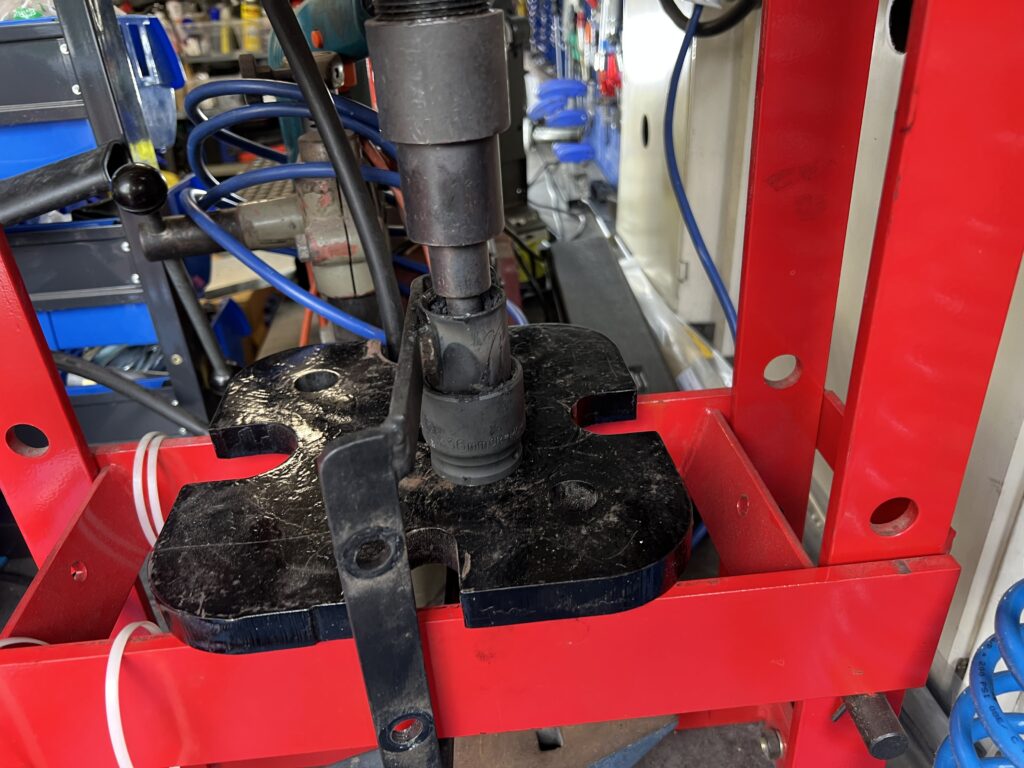 There’s some surface rust but overall not too bad. 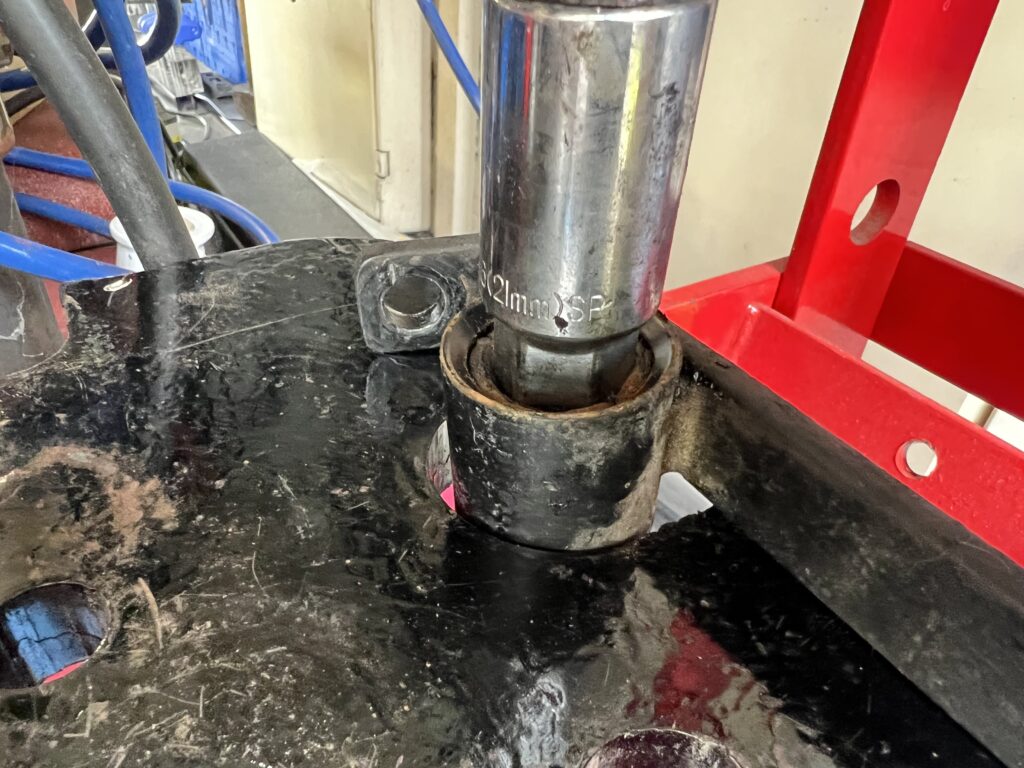 Old ford bush next to the new poly bush. 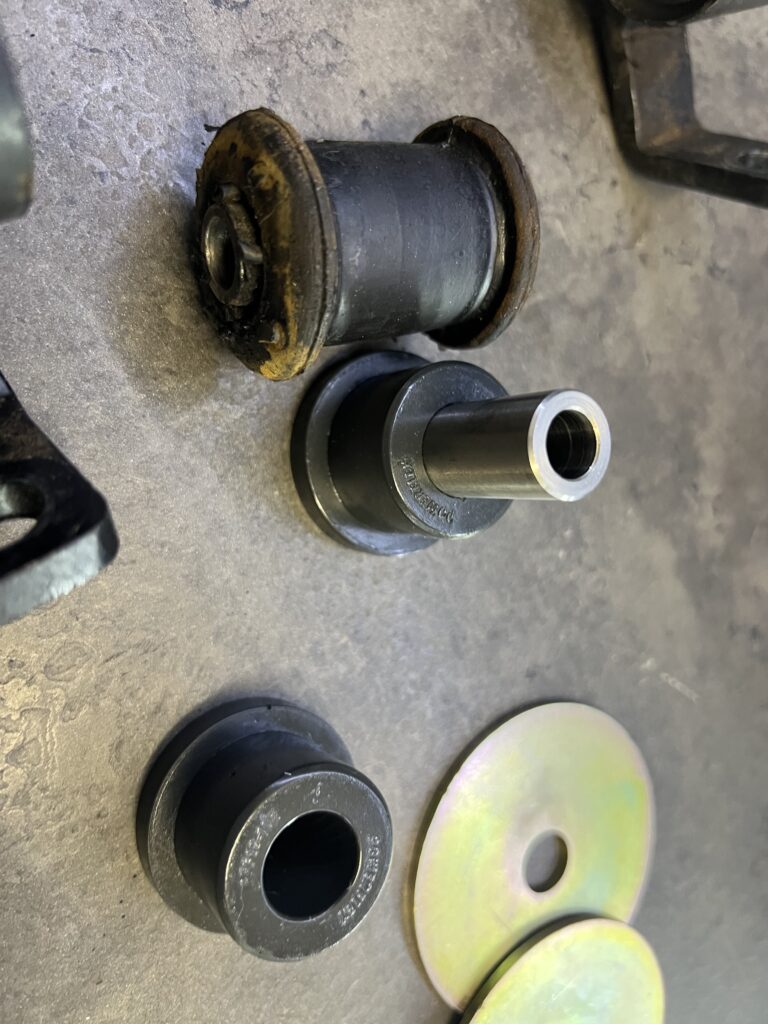 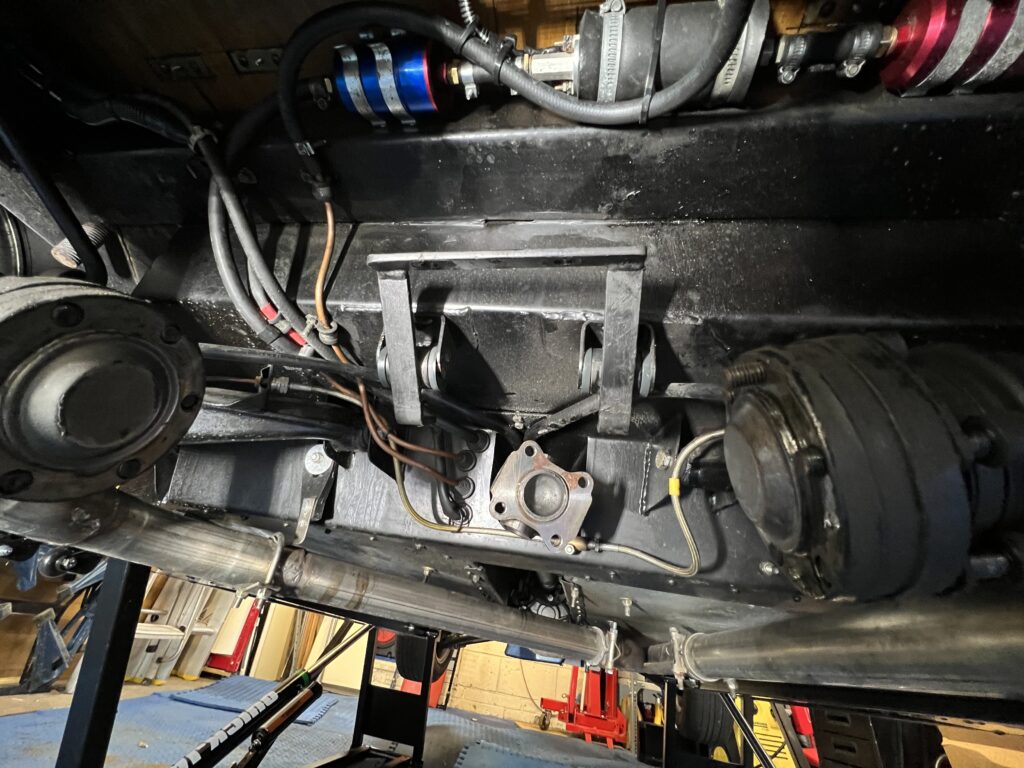 Used the power saw to chop out the old OEM bush 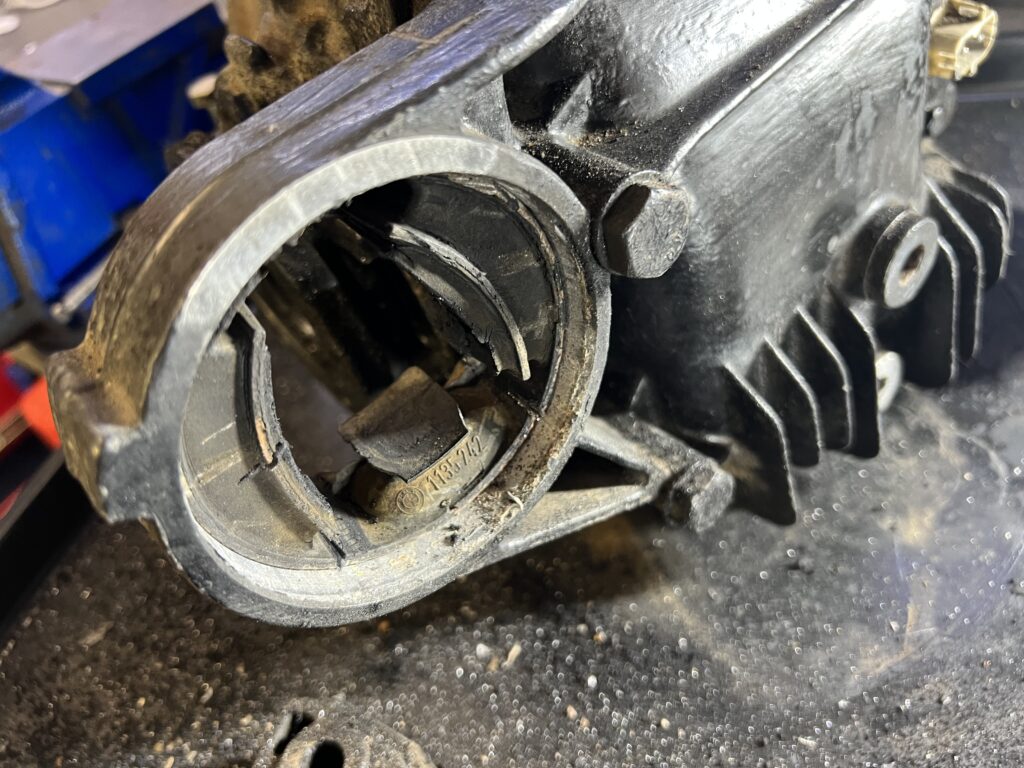 Fitting the new powerflex bush, these always go in so easily compared to OE bushes. 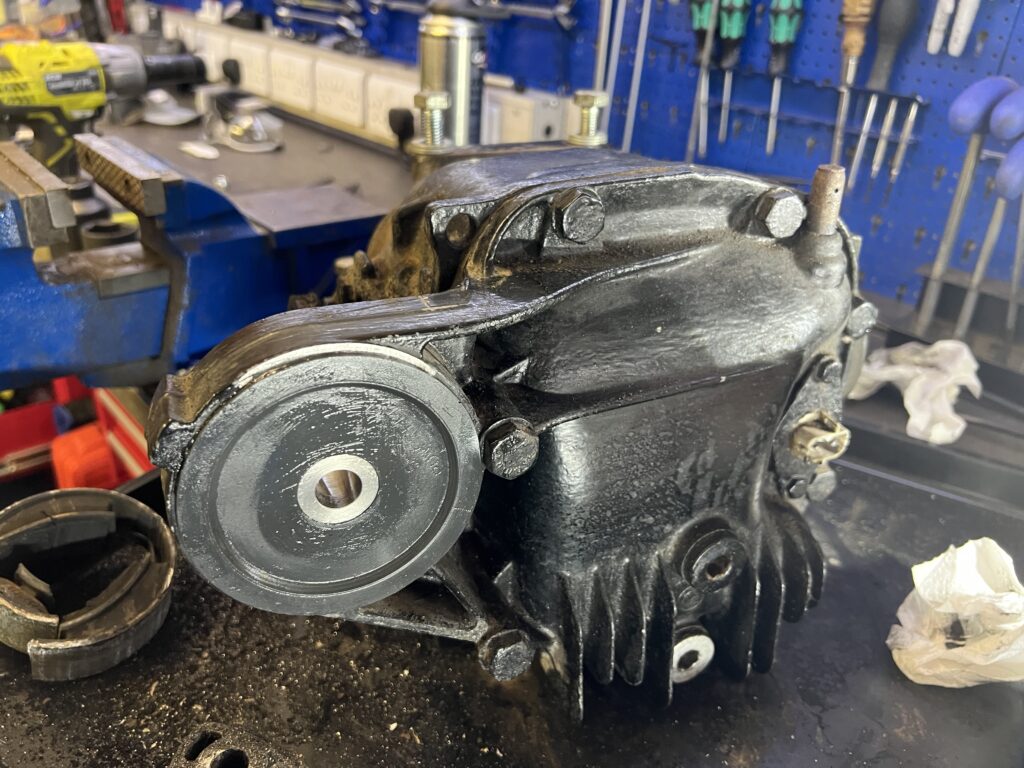 This one has a big washer either side of the bush to keep everything in place. In addition to this is need two more small washers to space the bolt to the diff hanger (more foreshadowing, there 7 layers that need to line up here). 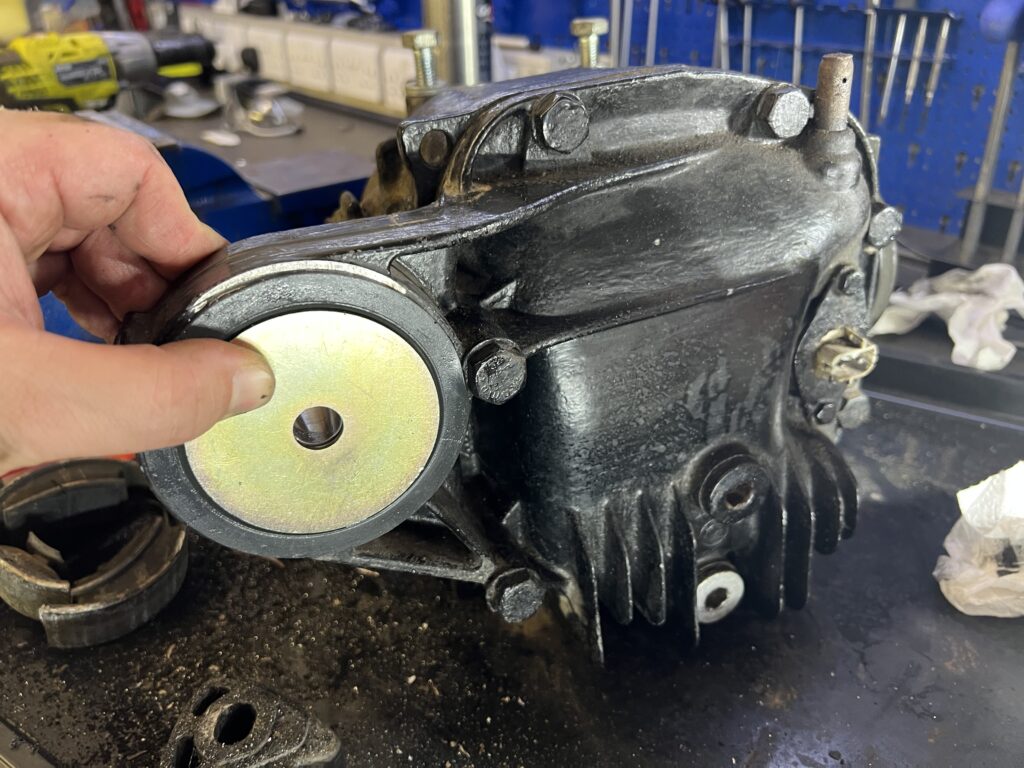 While everything was taken to bits it was a good opportunity to powdercoat the diff hanger with a fresh layer. Some of the original had flaked off and there was a little surface rust. Not much easy to clean up. Here’s the coated part baking next to the heat lamp to cure the powder. 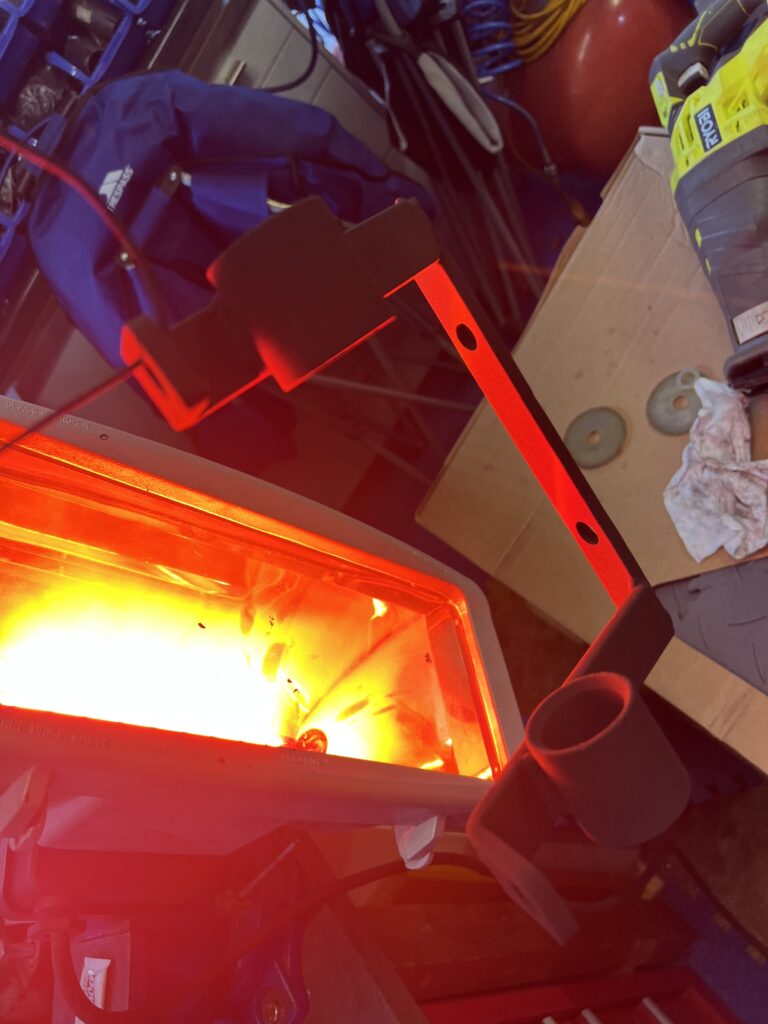 Finished part cooling down, this is the ‘matt black’ finish which is still a bit glossy but has a bit of a rough texture. 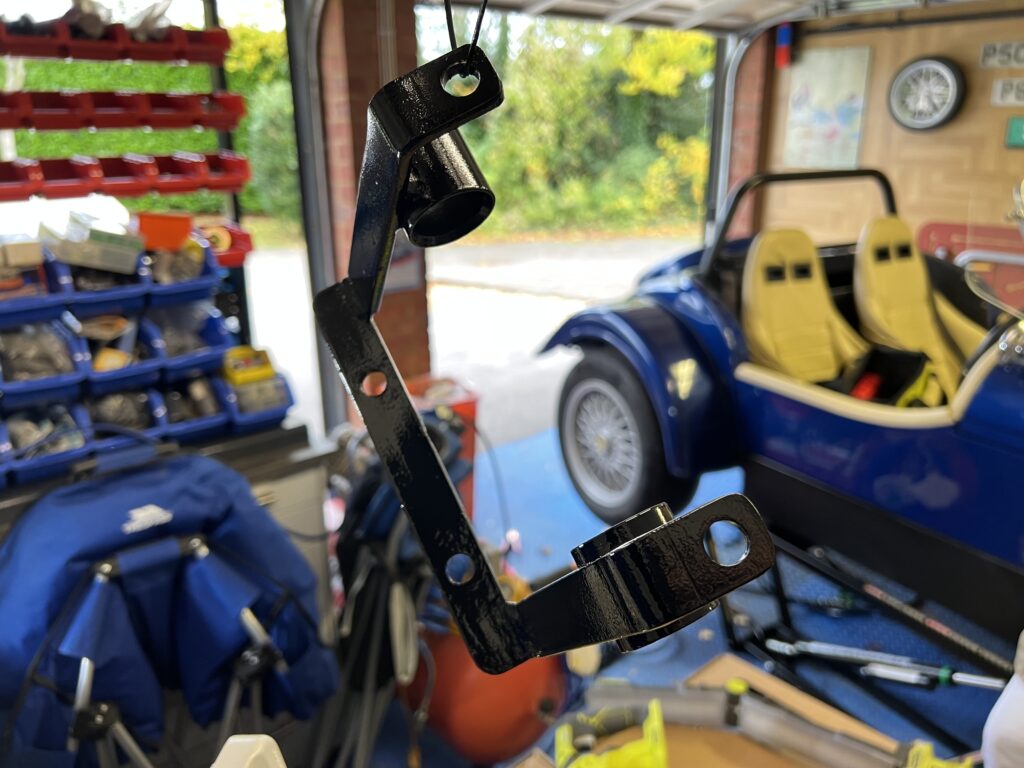 Fitted back on the diff with the new poly bushes looking very shiny again. 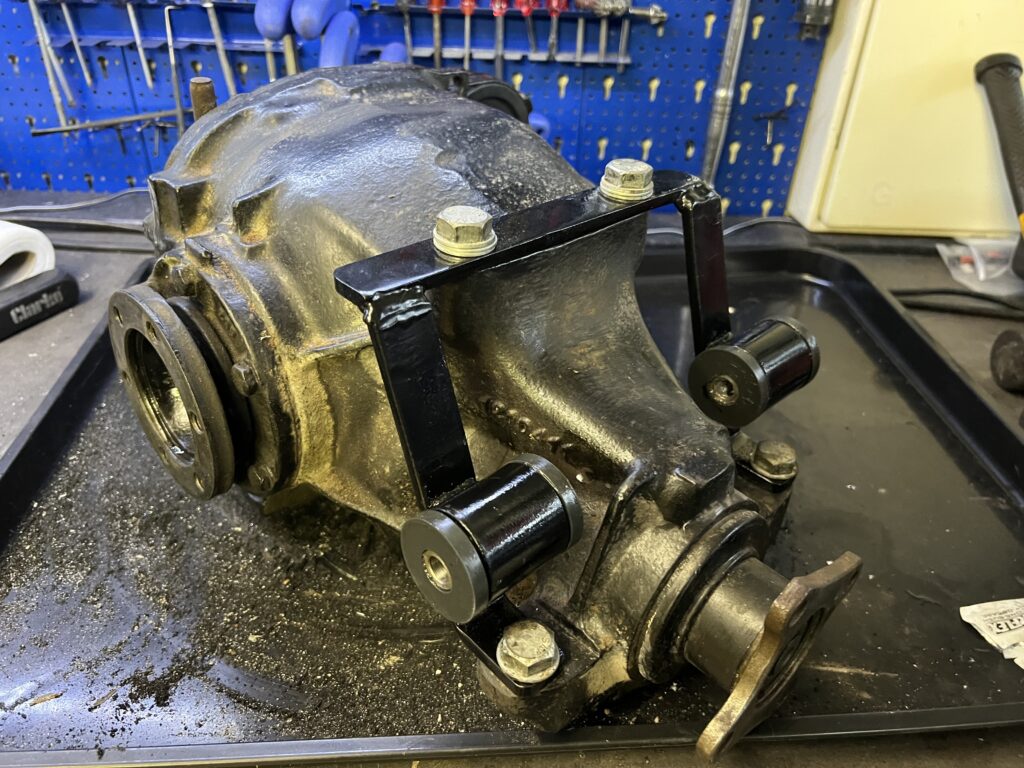 So, the foreshadowing. This is after trying to fit the diff the first time. Couldn’t get the large bolts in on both sides. Ended up bending these hangers, so took the diff out, and both hangers. Bent the one that got messed up back into shape. Both got a new layer of powdercoat too. Re-fitting took a long time, it was easier getting the mounts back into the chassis than bushes into the mounts. However it took a lot of fiddling to get them seated in. This was with the rear bush held up with a screwdriver so it could move around a bit. 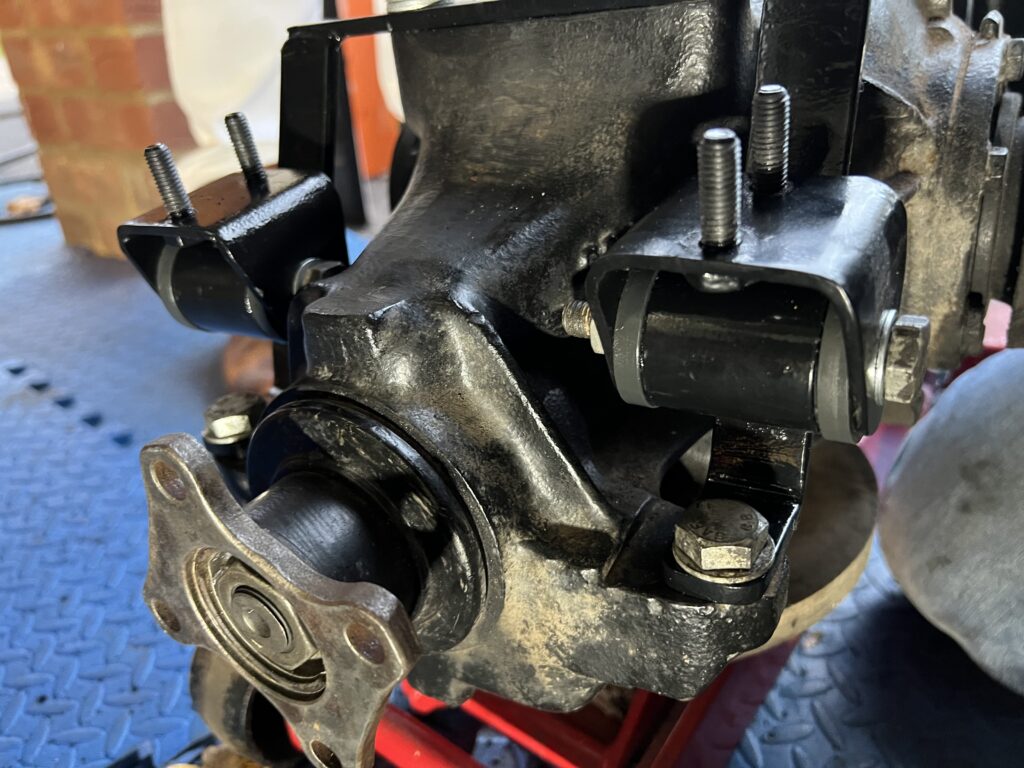 The new rear diff bush has a much tighter tolerance than the OEM one and required two washers either side of the bush. Took a load of fiddling to get all 7 layers (hanger, small washer, large washer, metal rod the bush sits on, large washer, small washer and finally the hanger on the other side). 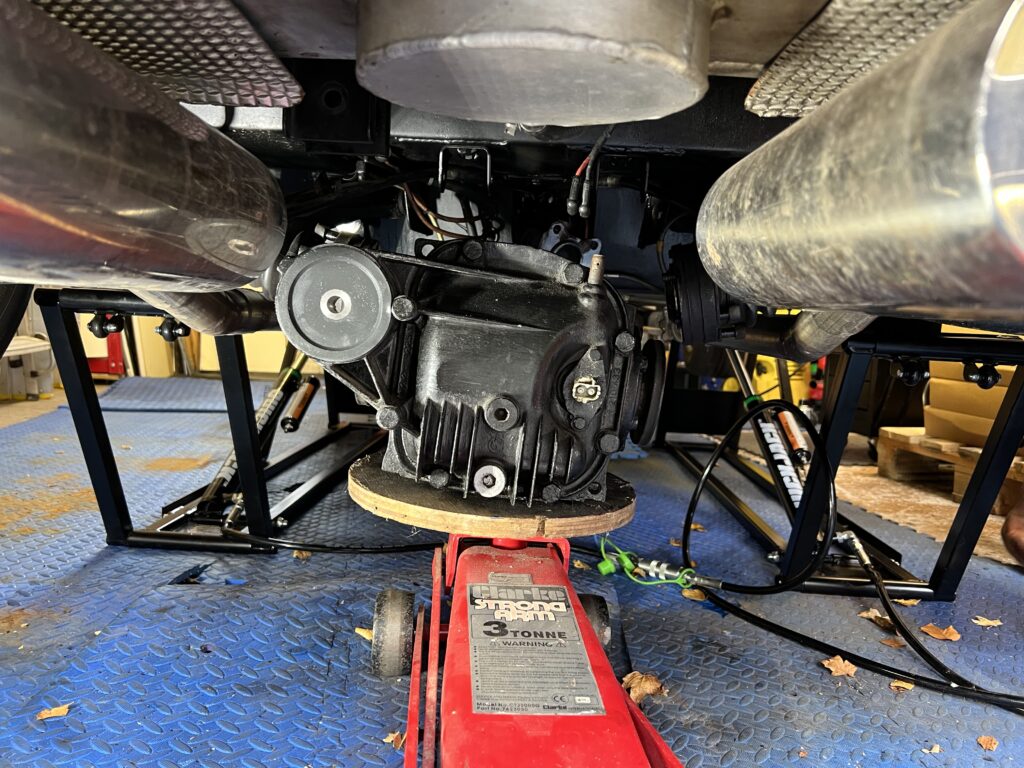 Yes it did go dark while getting the diff back in. Here it is back in place. 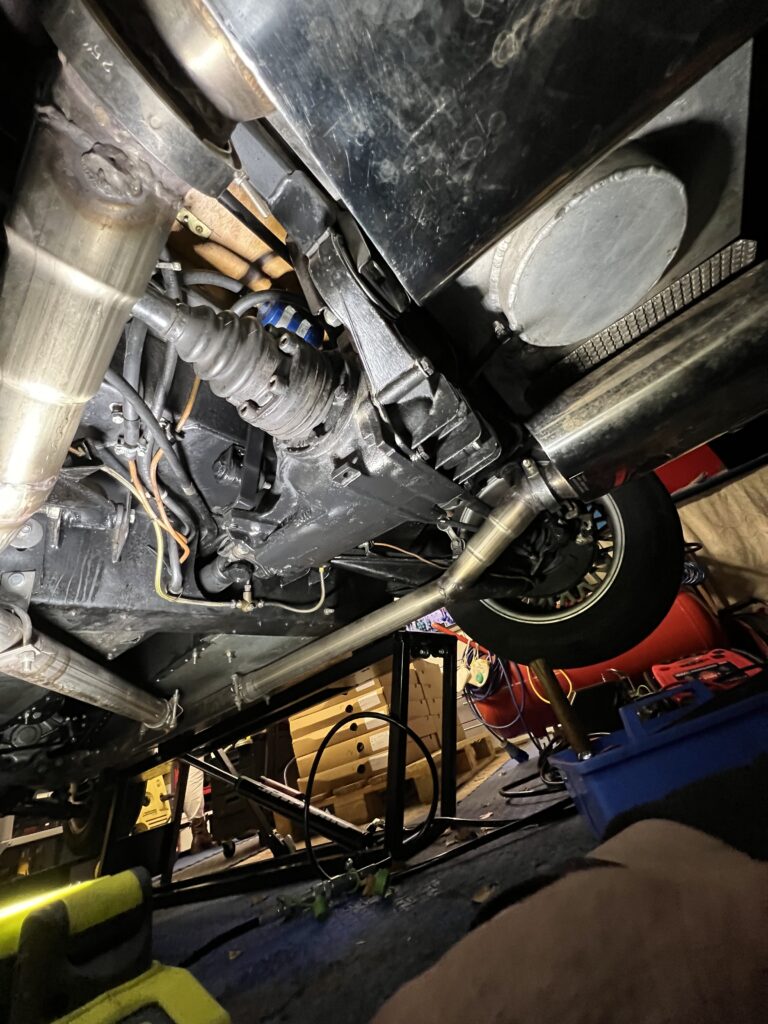 The squeaking is gone, power transfers through the drivetrain smoothly. Overall bit of a pain but well worth it.