Yesterday the Sportster passed it’s MOT. Testers were ready and waiting as they heard it coming!

Advisory on near side lower balls joint so I’ll be replacing that. He said there’s only a tiny amount of play but they’re relatively cheep parts which are easy to whip out with the airgun!

The tax disc and number plate came today! Just need to have some plates made up and its ready for the road

DVLA Inspection took place today so with any luck we’ll have a tax disk and reg number in a about a week!

Some final touches to the interior, thanks to Bilal at Strom Motorwerks for the custom engraving

It passed SVA today, thanks again to Mark top bloke!

(couldn’t get a pic of us with car due to government regulations, never mind!)

With the belts repositioned the boot floor needed to be modified so they clear. 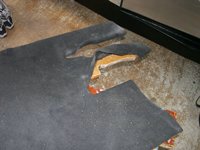 Smoother out the edges around the holes for the belts. 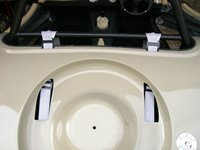 Belt holes all done and cleaned up 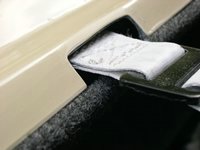 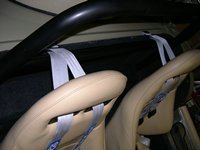 Sportster through the looking glass 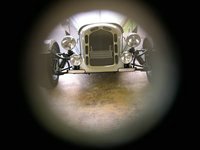 Lets get the mundane stuff out the way first: 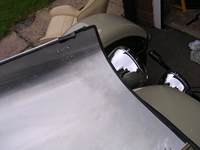 Edge trim now firmly attached to the bonnet and surround 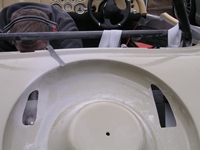 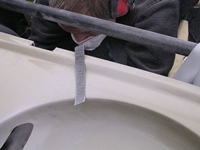 Holes in the tub for the belts to clear 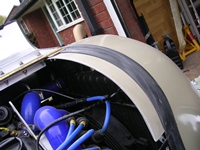 Edge radius on the fibreglass 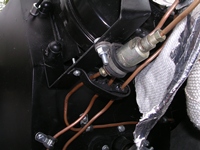 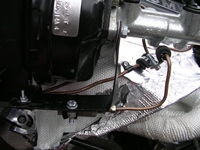 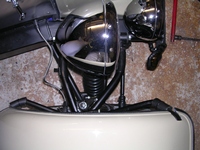 Ok I’m officially an idiot. After spending many ours buggering about with a camber/caster gauge make lots of adjustments and getting nowhere. Also measured up my Coupe as a reference. The front wheels have always looked a bit off to me. Turns out I was right. The wish bones are correct left and right, but they 180 degrees up the wrong was. DOH!!! Flipped the wishbone over, now the car auto centres no problem at all!

Note to all builders – make sure the more curvy part of the wish bone is at the front as in these pictures!

Bracket made and installed for the brake compensator valve. Its now solidly bolted in place with a P clip. Also add an extra P clip to one of the brake lines.

Heat shielding installed for the brake servo and master cylinder

Here’s a piccy of us at SVA:

A trip to Metal Supermarket in Southampton in the morning to get some steel tube, then a visit from TA member Black-Cat (Tom) in the afternoon. Huge thanks to Tom for bringing his TIG round to weld this bar in for us. He also brough his tube notcher which is an awesome bit of kit!

Tube notcher makes quick work of getting the angles and surfaces right for welding.

Tom welding the underside of the bar – not an easy place to fit in!

And paint on the bar

It failed. However it’s not that bad:

1) Seat back strength. As the seats have harness holes in an impact all of the force gets taken up by the back mounts and the seat back. I didn’t have evidence that the seat conformed to the M1 Directive 76/115/EEC. I spoke to Cobra after the test and they that they’ve never had an issue with Roadster 7’s and SVA, but the also don’t have any documentation to send me, they will call me back on Monday and see if the can sort something out.

Two solutions, get the paper work or weld in a bar higher than the harness holes between either side of the roll bar.

2) Mirrors. Due to the seat backs getting in the way (more than 10%) of the rear view the passenger side mirror becomes a requirement. You couldn’t see enough in that mirror. It requires convex glass. (and not just double sided taped on)

Two solutions, find some glass that goes in the existing mirror or replace the mirror.

3) Sheet metal edges on bonnet all round need rubber on them.  Would have done this there an then but I need to go back anyway so no point in rushing it.

4) Glass fibre edge under bonnet requires a radius of 1.5mm. Ditto above

5) Steering geometry – car didn’t self centre from full lock my fault for checking the properly. Need to get Camber, caster and toe in setting from Mark or Simon (not that I was able to get a conclusive answer before)

6) Heat shield brake master cylinder and servo – I put an ali sheet on there but consensus was that it would soak up more heat. Fix cover in heat shield, not problem got a box of that in the garage.

7) Brake valve compensator – I used zip ties to hole this up, needs a proper bracket.

8) Design weights were wrong on the form. Car is heaver at the back that expected – probably due to the exhaust. So need a letter from Marlin with new weights. The rear needed to be at least 563 (and the gross put up to cover this)

The collapsible of the steering column was a very close issue but they did pass it in the end after a lunch time chat with everyone else there and a study of the manual.

That was it so all in all not too bad, nothing that can’t be fixed. Thanks to Mark the tester at Southampton was nice a guy and very honest about everything all these issue are very fair points and I feel better about driving the car with them sorted!